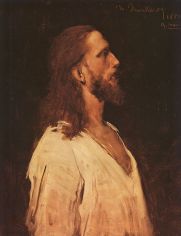 “…He had no beauty or majesty to attract us to him, nothing in his appearance that we should desire him… Like one from whom people hide their faces he was despised, and we held him in low esteem” (Isaiah 53:2-3, NIV).

A small picture of Jesus stood on the nightstand near my childhood bed. Long, flowing hair framed the masculine features of the Savior. The look of sincerity and quiet contemplation adorned his lips. His eyes were kind and focused, his beard perfectly trimmed. I would fall asleep each night under his protective gaze. Life was simple then, long before the awkward years of adolescence and the endless demands of adulthood.

But with age came struggle and temptation, sin and brokenness. The foes of anxiety and depression became my constant companions. Loneliness, fear, failure, and doubt attacked my mind and strangled my faith. I needed a Messiah to invade my mess of a life, a Savior to rescue me from my sin and from myself.

That’s when Jesus became the most real to me. I realized that there was so much more to him than an artist’s rendering recalled from my childhood. I recognized him, yes, as true God, but as one who had taken on human flesh, and with that, my very sin. I learned to appreciate his rawness, his untamable Spirit, his unkempt appearance, and his humanity despite his divinity. He became to me a Rescuer, who was not afraid to save me from the darkest, most remote places of my rebellion. He was not afraid to get his hands dirty, even bloodied over my sin.

The realness of God dressed in human flesh and the ugliness of the cross causes many to stumble. But true beauty is found in both. And when we get real with him, he becomes real to us.