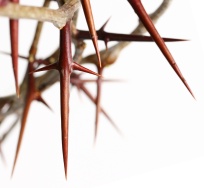 Even in the bloody brutality of the crucifixion, we find moments of tenderness and compassion. Suspended on the cross, Jesus pleads for the forgiveness of people, the men and women most immediately connected to his death, as well as each of us whose sin played a part in placing him in this most dire of situations.

Jesus gazes upon the two criminals hanging on either side of him, one who is berating and mocking him, and the other, who, with his dying breaths, asks for and receives Jesus’ forgiveness. Jesus’ compassion and kindness are not lost in these moments of anguish and suffering.

Then, Jesus glances through blood-crusted eyes at Mary, his mother. How much he longs to be with her, to hold her, to tell her that everything is okay. He is prevented, however, not only by the cross, but by the mission he must complete. He must accomplish this act for the forgiveness of the world’s sins, for the forgiveness of Mary’s sins also.

Mary, stricken with grief, stands in the shadows of her child’s cross. Memories of better days flash through her troubled mind. The hands that reached out to her as her son took his first steps as a toddler are the hands that now extend from east to west upon this cruel device of a Roman cross. Stumbling infant feet are now pierced with nails.

With the weight of the world’s sin upon his weakening shoulders, Jesus is thinking about the well-being of Mary. As he completes the monumental task of dying for the sins of all people, Jesus still has room in his heart for the bond between mother and child. So, from the cross Jesus arranges the informal adoption of his good friend, John to Mary. It’s John who will be the caregiver, a role that Jesus would have played if his life were extended.

On this day, a mother will lose her son in the most brutal fashion imaginable. They will be reunited, however. Jesus’ is making a way for that.

2 thoughts on “Mother and Son”